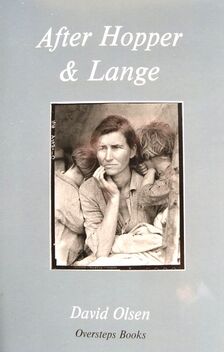 After Hopper & Lange is new in 2021 from Oversteps Books.

In an era of homelessness and wealth inequality, this is a poetry collection of contemporary social relevance. The gravity of its historical era foreshadows the challenges of our own time. After Hopper & Lange narrates selected images by painter Edward Hopper (1882-1967), photographer Dorothea Lange (1895-1965), and other American contemporaries with similar concerns. Their paintings and photographs documented the alienation and dispossession experienced by Americans in the 1930s and 1940s, during the transforming events of the Great Depression and the Second World War. This collection describes the conditions the people encountered, and their great exodus. Most of these hard-working men and women were victims of circumstances beyond their control. Severe drought and strong winds – such as might be caused by climate change today – stripped topsoil from previously fertile land. Mortgages routinely incurred during planting were foreclosed when crop failures meant that seasonal debts could not be repaid. Mechanization made family farmers uncompetitive, and enabled larger agribusinesses to consolidate control of large tracts of land when conditions improved. Throughout, the neglect of persons in high authority combined to create incalculable misery and homelessness. Meanwhile, industrialization alienated people in cities and towns. Despite these hardships, this book celebrates the dignity and resilience of individuals who survived those fraught times, and commemorates the lives of those who didn’t.


With cool intelligence and elegance, David Olsen bears witness in this compelling collection to human existence at the edge. Determined never to avert his gaze from suffering, while remaining focused on the strength and humanity of the people, this unflinching poet writes with ‘seething patience’ and compassion, delivering us to scrutinise issues today through the lens of 20th century American history. Exquisitely observed ekphrastic poems juxtapose Lange and Hopper’s visual art, illuminating from such vastly different perspectives our existential separateness and simultaneous interdependence. The presence of a strong social conscience is evident throughout, as is the agile yet carefully controlled voice and attention to the beauty of the world, ‘our accidental home’. ’Everything we touch is composed of broken stars’ – indeed, these powerful poems deserve a wide readership. ~ Hanne Busck-Nielsen, poet and translator


David Olsen’s depth of feeling for the artist and the photographer, whose work these poems explore, illuminates their subjects, making us look again to see detail and significance we might otherwise have missed. In Hopper’s work he understands instinctively what the painter and printmaker himself called “the outward expression of an inner life in the artist”. With Lange he engages with her subjects of rural poverty and exploitation. It is this deep concern for the human condition that powers this fine collection.  ~ Paul Surman, author of Places

A published review of After Hopper & Lange appears here: