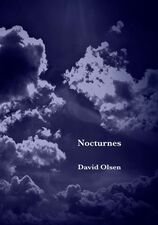 Nocturnes consists of two sections of nocturnes separated by a section of poems exploring the shadows of memory. The nocturnes in the third section are intensely personal. Nocturnes was a semi-finalist in the 2020 Word Works Open Reading. Samplers from versions of this collection were highly commended in the 2014 Geoff Stevens Memorial Poetry Award competition of Indigo Dreams Publishing, and long-listed in the 2019 and 2020 Cinnamon Press Literature Prize competitions.

According to Dr Jan Fortune, Editor and Publisher, Cinnamon Press:

Nocturnes confirms David Olsen as a poet of increasing surety and depth.  The language is fresh, supple and embodied. The snow that packs around silver birches is not so much weather as memory accruing in drifts and hollows, and we see the dark releasing stars ‘from cerulean confinement / to indigo liberty’.  But the pressure on language is not only in finely tuned and distinctive imagery, but also in the interrogation of the medium of poetry itself: words.

How do they carry their load of emotional resonance, and how does this play into our illusions? How do we actually become language? How do the impressions of a scene cohere into narrative?

There are huge questions at work here: deeply personal, existential, but also ethical and political. Whether exploring the pursuit of sleep at night, or the ‘deadly virus’ of ‘inbred bigotry’, there is a humane intelligence at work in these poems, one with the courage and vulnerability to face ‘the months of silence’, admit to the visions of memory that go on ‘wrestling with the dark’. Ultimately, it is the tenderness of losses and wounds – and the exquisite poignancy and grace with which they are faced – that sets Nocturnes apart as a collection of heart-breaking elegance.