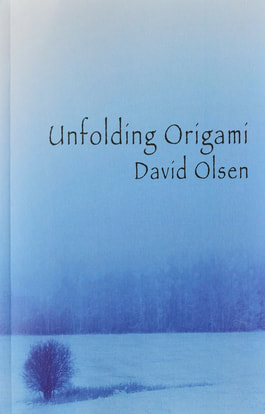 Adroit and affective, David Olsen’s poetry explores liminal states and identity in a confident, graceful voice. His lucid style and keen observation exhibits depth and precision. Images are delicate and metaphors are controlled; resonant with humanity. There is poignancy here, but never sentimentality; always maintaining the tension of the poetic form. Insightful, affectionate, and always accessible, this is an accomplished, mature and long awaited full-length debut.


This 80-page collection consists of metaphorical poems exploring the power and
glory of memory. Although some poems relate to the author's personal experience,
as in childhood memories, others involve imagined recollections of invented personae.
Still others meditate on the attributes of memory itself.

Although few poems are end-rhyming, because most approximate speech rhythms
of blank verse, there are frequent instances of internal rhyme, alliteration and
assonance. Although the subject matter tends to be dark, there are occasional
flashes of wry wit or ironic humour.

Unfolding Origami consists of three sections. The first, Sailing to Atlantis, includes some of the poems from the author's third poetry chapbook. This
section follows the narrative trajectory of a tempestuous and tender relationship with a formerly abused woman. The difficult relationship is
transformed when she develops a fatal cancer. After her death, the speaker of later poems expresses grief through their shared memories. Sensory
impressions and other memory triggers bring the decedent to mind with shattering clarity and vividness.

Winter Sonata, the second section, evokes the seasonal change from autumn to winter. This section explores the effects of the taut season on the emotional
landscapes of the mind, often involving the lives of women, sometimes in harsh climates.

Exit Wounds, the third section, recalls childhood and adult memories. Ageing is a prominent concern of this section; two poems involve the loss of memory in
dementia. Some of the poems are from New World Elegies, the author's second poetry chapbook. Although elegies of private persons and public figures are
present, here the elegy is more broadly interpreted; war, economic and social justice, and other brutal failures of public policy are examined.

See www.cinnamonpress.com for more information on this publisher. You  may purchase signed copies of the book directly from the author by writing
davidolsen1965 [aT] gmail [doT] com.


The Cinnamon Press catalog listing for Unfolding Origami can be found here:
https://cinnamonpress.com/index.php/products-listing/product/9-unfolding-origami-david-olsen